Be a Champion (3 lessons to win in life) 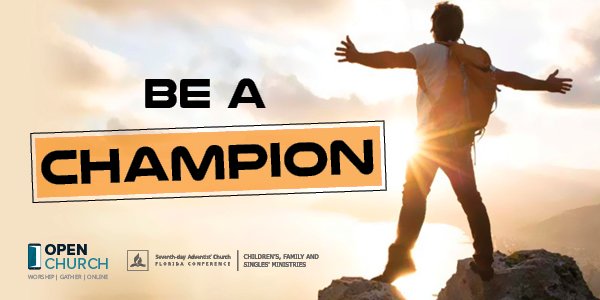 No one wants to be a loser in life. We all want to win. We want to be a champion.

When God needed a king to bring revival, He chose Josiah when he was still eight years old. You do not have to wait until you finish college to become a giant of God. If you want to be a giant of God tomorrow, you have to start today so that when tomorrow comes, you are ready to serve God powerfully.

The character you are building today is the foundation of your success tomorrow. Be a champion. The Biblical story of King Josiah gives us three lessons to become giants of God.

The three lessons that this child king wants to give you today are: Focus on developing yourself, focus on small victories, and focus on living for God.

Concentrate on your personal development to be a champion

Research shows that the way people feel about themselves has a huge effect on their success. If you want to be a giant of God, you first need to develop a giant’s mind. If your mind is not ready to reach the top of the mountain, you are never going to get there. A Christian who has a negative image of himself/herself, who considers themselves to have little value, who is not important, who has low self-esteem, will never be able to understand the place and value that Christ gives him/her as a child of God.

The Bible is full of incredible promises for the children of God. But the problem is that we do not believe in those promises because we do not think of ourselves as worthy of them.

If you want to be a champion…

My friend, if you want to be a champion, you need to understand that your identity is not in Hollywood, or what society calls “normal” in this world. Your Creator is the One who gives you your identity. Develop yourself around the plan that your Creator has for you, and not around what the media says about you as a person.

But, if you look at yourself through God’s eyes, you will realize that He has created you to be a champion in this world, to be the head and not the tail. You will be your worst enemy if you do not develop yourself. Your negative thoughts will rise as walls in your life, and they will not let you be a champion.

Josiah believed in God’s plan and not in the negative message that Satan was showing him. Satan may be telling you: you are too young to be a king, you do not have the experience or the talent to lead a nation, your country will not believe in you, you have nothing to offer your country, and you are not good for this position. But King Josiah set out in his heart to be a champion of God by believing what God said about him and not what Satan said.

Focus on celebrating small victories to be a champion tomorrow

The second piece of advice is to focus on the little things. Anyone who has tried to sleep with a mosquito in the room knows the impact that something small can have. Celebrate small victories. Great victories are nothing more than the accumulation of many small victories.

The theory of “small victories” increases your motivation in life, productivity, and satisfaction with what you do. Small victories are the prelude to great victories. No one reaches the top without first walking through the valley. Develop a winner mentality by celebrating small victories every day.

Josiah and the small victories

Josiah understood this principle in his life and focused on making daily progress through small victories with significant habits. His character was built on his daily life. He developed the habit of seeking God daily in his life, praying and meditating on God even when no one from his home or family did.

Those little victories in his life served as a trampoline for all the other victories he achieved in his life. When he was 16 years old, he decided to tear down all the altars to Baal and walk in David’s ways. When he was 24 years old, he called God’s people to revival by reading the book of the law when it was found. All of this was possible because he began to celebrate small daily victories in his spiritual life from an early age.

Michael Phelps is a living example of winning small victories. Phelps is the Olympic swimmer who has won the most medals in swimming in the history of the sport. There are many reasons for Phelps to be successful as a swimmer. He has big hands, a powerful torso, short legs, and trains like no one else do. But Phelps had a problem, he was nervous at the time of the competition.

When Phelps went into the water, his glasses broke and water began to enter his eyes. There was nothing he could do. The problem worsened and by the time he reached the finish line, he was practically blind. He could not see the line that marked the bottom of the pool or the mark that announced that he was near the end of the pool.

Phelps did not let panic control him

He had envisioned this same scenario long before in Michigan. When his coach told him to swim in a dark pool to prepare him for this great competition. As Phelps got to the final stretch, the crowd was screaming, but Phelps did not know why they were screaming, was he winning or losing?

He started to swim faster without knowing what was happening. When he reached the end, he took off his glasses and looked at the scoreboard, next to his name it said WR. Michael Phelps had broken the world swimming record despite the obstacle he had! The small victories he had celebrated in his daily life had prepared him to be a champion.

My third piece of advice is: to focus on God to be a champion. If you want to be a giant of God, He needs to be the center of your life. To understand this, God is the source of wisdom, understanding, and all pleasure. Satan does not want you to understand. He tries to make you think that he is the source of all success in this world.

The only One who can offer you eternal life

So, live for God as a giant and the things that no eye has seen, what no ear has heard, what no human mind has conceived. Those are the things that God has prepared for those who are His champions.

Share with me what d you do every day to be a champion in your life. Your comments will bless many people today.

Forgiveness and its meaning in the Bible
August 24, 2021

There is no victory without sacrifice -Don’t lie to yourself
August 18, 2020