When boundaries are broken, what to do? 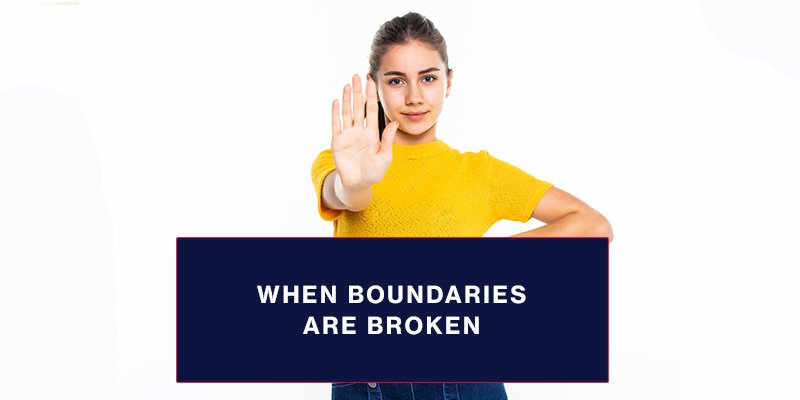 There is no balance without boundaries. There cannot be physical, relational, or emotional health if there are no boundaries. When boundaries or limits are erased, there is chaos. The entire universe created by God is directed by limits He has set.

What are boundaries? They are lines, both real and imaginary, that mark property, the end of a surface or body, or maybe the separation between two subjects. Limits are that point that has not or must not be exceeded.

The Earth was without form and void, and the first thing God did was to set boundaries and limits. Chaos on Earth ended when God started establishing them. He created light in order to set a limit between light and darkness. Each day created by God had a limit.

That is why the Bible says: “and it was the afternoon and morning of the first day” (Genesis 1:13-15). Clear boundaries to maintain order in everything that was created. God also established a limit between the Sabbath and the rest of the days of the week. Sabbath was declared a day for worshiping and rest from all the work (Genesis 2:3).

But, I want to deepen in the limit God established between Himself and His creatures, Adam and Eve. This is reflected in the tree of knowledge of good and evil. God told Adam: “the day you eat from that tree, you will die” (Genesis 2:16-17).

Boundaries between God as a creator and His creatures

God set a clear limit between Himself as a creator and His creatures, which is why He had the right to set something aside for Himself through which men will show respect for the limit established by God between Him and His creatures. If God had not set that clear limit, humankind would have believed they owned all that was created and that they were at the same level as their Creator. This is why God set a limit, to differentiate the dominance of His property and what belonged to His creatures.

As we mentioned at the beginning of this post, there cannot be healthy relationships without clear boundaries or limits. And, there is great truth in the human relationship dimension and the relationship between men and God’s dimension.

When boundaries are broken

When limits are violated, whether it is in the outside world, as happened in the relationship between Adam, Eve, and God, or the inner world due to the lack of control of our desires (eating the forbidden fruit), chaos erupts.

Chaos came to Adam and God’s relationship when Adam crossed the limit of the forbidden tree and committed sin. Violating the established limit produced a separation between God and humankind. Adam could no longer talk to God the same way he did before, face to face. The consequences of this violation included death, since the wages of sin is death (Romans 6:23).

But, that limit was also produced in a psychological dimension. The lack of self-control to avoid eating the forbidden fruit led them to begin a life of debauchery and internal chaos. We are still experiencing the problems the first couple experienced back then today.

What can we learn from this? That God has created us so that we know where we end and where others begin, and so that we can clearly understand what our responsibilities are. We must respect what God has set aside for Himself. We must take responsibility for our souls with fear because God created us, and we will be held accountable one day for what belongs to us.

Proverbs 4:23 says that “above all else, guard your heart, for from it flow the springs of life.” In other words, we are stewards of our lives because they are within the limit of autonomy and individuality we all have. That is why God gave us free will. God cannot cross the limit He, Himself, has established, in the same way, that Adam and Eve could not cross the limit God had established with the forbidden tree.

This means that limits and boundaries protect both subjects involved. In the human case, it is our highest responsibility to answer for our feelings, attitudes, behaviors, choices, talents, thoughts, desires, and love. What am I trying to say? If I am experiencing anger, it is my problem and not someone else’s, because my emotions are inside the limiting circle of who I am as a human being.

Therefore, I must take full responsibility and solve the problem the way the Bible stipulates in Ephesians 4:26, “Be angry, but do not sin.” If my behavior is out of place, it is my responsibility to address that problem and to control that maladaptive behavior, as stated in 2 Peter 1:6. One day, I will have to be held accountable before God for everything that is within the limits that concern me as a human being.

Principles about the need of boundaries

What principles can we extract from the limits established by God when He placed the tree of knowledge of good and evil?

In my next post, we will talk about how to apply all of these principles to family relationships.

Let me ask you, what limits are you violating that may be leading you to experience chaos in your life. What do you think you should do? What advice would you give to people who are reading this post?