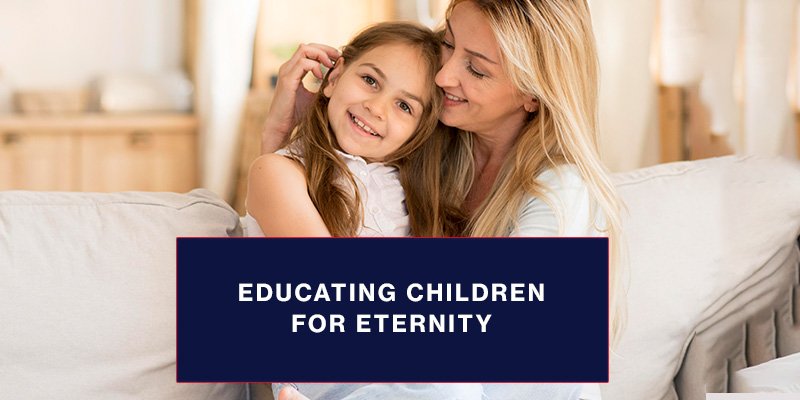 Samuel is lost! We were at the amusement park with the family. Zory was with Samuel and they both got distracted, then, the worst thing we could have ever imagined happened. Samuel got lost. We started screaming his name, looking for him everywhere. I was not there with Zoraida, so, when I heard the screaming, I quickly went to where she was and asked her what had happened.

We started looking for Samuel desperately. The thoughts that went through my mind were indescribable, things like the ones you can see on a TV series like Special Victims Unit, stolen kids. It was a nightmare! Then we finally found him playing, as if nothing had happened. I would not wish the feelings we experienced back then on any parent.

Educating Children for Eternity and avoiding losing them

Today, some parents have lost their children and do not know it. Other parents have already noticed that their children are lost. But they are desperate and do not know what to do. I am not talking about the children who get lost in the mall, beach, or amusement parks, or who left the house and never came back. I am talking about children who have gotten lost because they do not want to have anything to do with church, much less know God.

We can see some statistics on what the relationship of young people is like with the church:

An old story with teaching for us

Let us study a fascinating but sad story. The people of Israel had gotten out of Egypt to go to the Promised Land. But the journey that was only to last just a few days turned into a 40-year-journey because God said that due to their disobedience, that whole generation would not enter the Promised Land. Only Joshua and Caleb could enter.

Joshua led the people of Israel to the conquest of the Promised Land and had great experiences with them. They respected Joshua the same way they respected Moses. But while the people were celebrating their victories, something was happening behind the curtain that was undermining God’s people. The people and their leaders were neglecting the divine order, which was about to produce ravages on God’s people.

In the book of Judges, chapter 2:8-11 we can read the following: “Joshua son of Nun, the servant of the Lord, died at the age of a hundred and ten. And they buried him in the land of his inheritance, at Timnath Heres in the hill country of Ephraim, north of Mount Gaash.”

What happened to them

After that whole generation was brought to their ancestors, another generation grew up who did not know the Lord, nor what He had done for the people of Israel. Then the Israelites did evil in the eyes of the Lord and served Baal. Here, we can see the sequence:

How could a whole generation who did not know God rise up.? Now, from Genesis to Joshua, the knowledge of God had been transmitted verbally. There were no books, papers, or computers.

How could the knowledge of God be transmitted if there were no computers or books? Parents had the responsibility before God to transmit all the teachings to their children verbally. If a generation who did not know God rose up, it was simply because their parents did not fulfill their responsibility to raise their children for eternal life.

The same thing that is happening nowadays happened back then. The only way we can stop this epidemic is by going to the Bible and studying the reasons these mistakes were made, and the solution God gives to those mistakes so that we do not have the same problems.

It is imperative to understand that, as parents, we are God’s stewards. It is the message we can find in the first chapter of the Bible. God creates man in His image. God’s image has been interpreted in three dimensions: structural, relational, and functional images of humankind.

Humans have a structure that allows them to think, create, and act. That structure leads them to have an intimate relationship with God and with their neighbor because that is the reason for their creation. The structure and relationship lead them to fulfill the functional aspect of God’s image.

Humankind was created to fulfill a function: to be God’s stewards for all that was created. Genesis 1:28 says: “be fruitful and increase in number; fill the earth and subdue it.” This means that God is the Creator of all things and humankind is the administrator.

Therefore, when God gives you a son or a daughter, He is not giving you a gift so you can do whatever you want with him or her. God is giving you that child so that you prepare him/her for Eternity. Now, this gets a little more complicated than that, because when you start seeing your parenting from the stewardship perspective, everything changes.

When we talk about stewardship, many times we think it is regarding tithes or offerings, but, stewardship is much more than that. God saved a tree inside the Garden of Eden that belonged to Him and He forbade Adam to touch it.

When I see myself as God’s steward regarding my children, I cannot see them as a problem, or as a burden. I must see them as a blessing because those children God gave me do not belong to me, they belong to God and He will hold me accountable for what I did with them.

Each generation must transmit a legacy


God gave parents commandments about the spiritual legacy they must transmit. For us to understand how this is possible, we need to understand some sociological aspects. Each generation is held accountable for the generations that follow.

What Word of God says

I am going to give you some Biblical evidence about what I am writing here.

Analizing what Word of God says

Let us analyze these verses: parents are called to love Jehovah with all our hearts, with all our souls, and with all our minds. The teachings parents receive from God must be repeated to their children, they will speak of them inside the house while walking, and when they are going to sleep.

If Joshua 2:10 says that a generation rose who did not know God, it is simply because parents failed to fulfill God’s order to educate for Eternity. God does not do things without a purpose. If God gave children to the people of Israel, it was for them to prepare those children for Eternity. The raising of a generation who did not know God brought great sadness to God’s heart.

Christian education is not optional for parents

Parents back in the times of the people of Israel must have educated their children in their homes and taken them to the temple and schools to be educated there. The prophets were their teachers.

That is why I say that Christian education is not optional for parents. It is not the school or church’s responsibility, but the parent’s. One day we will have to be held accountable before God for the spiritual legacy we transmit to our children. If I have full responsibility, I cannot present any excuses for me to be released from that responsibility.

In your case, is the story repeating itself?

We forget that we are stewards of our children before God.

There is no time for personal study or to study with our children. The media is raising them now.

Helen White says that parents have neglected the responsibilities God gave them, and they must face this reality when the final judgment comes. Then, the Lord will ask: “Where are the children I gave you so that you could prepare them for me? Why are they not at my right hand?”

Can you imagine being in Heaven with your children? The happiness will bring? Can you imagine what would happen if we, as a church, work together to educate our children for Eternity? Think of this church 10 to 20 years in the future. Where will it be?

God is answering my prayer not in a way I would have wanted Him to answer it, but since I am a steward, I cannot decide in my children’s place. It is God’s decision what He wants to do with them.

What God loves the most in this world are our children. In the book of Isaiah 49:25, we read: “I will contend with those who contend with you, and your children I will save.”

“When you educate your children for Eternity, I will fight your battle”

Maybe you are saddened by the thought of how you raised your children and you did the best you could, but they are far from God’s way or the church. God says: when you educate your children for Eternity, I will fight your battle.

Maybe someone who is reading this post has not clearly understood these truths and feels guilty before God. But you still have time to help your children go back to God’s way, be active in church, have faith, and, do well. When raising your children for Eternity is your priority. God will defend you, fight that battle for you, and save your children.

These truths are also good for you since we are stewards of our own lives too. Seek God, His way, follow His commandments, keep His truth in your heart, and He will help you fight that battle.

I invite you today to share with us, in the comments section, what other ways we can be better stewards of our own lives and the lives of our children before God. Thank you and God bless you.