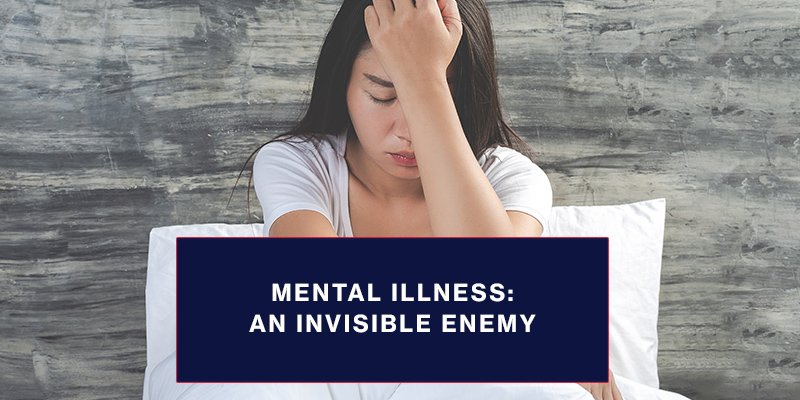 Many people with mental illness are suffering discrimination in our churches because we are not prepared to deal with the silent disease.

A few years ago, when I was returning from Tennessee from my daughter Jasmin’s graduation, Samuel’s (my youngest son) car had a noise in one of the tires. That noise had already been there for several weeks now, and he said that the noise was coming from one of the half-loose fenders.

Samuel would try to adjust it a bit, and then the noise would be quieter. As we were heading back to Miami, it was late, around 10:00 P.M. we were driving down the deserted road of I75 when we suddenly heard a high-pitched noise and the rear tire blew out.

I quickly managed to pull the car to the side of the road and, to my surprise, we discovered that the fender was not the problem. When we removed the wheel to put the spare on, we understood what the source of the noise was: the rear tire was damaged, and we did not know it. It looked fine from our point of view.

What’s more, it had only been a year since I had put four new tires on the car.  The problem was in a non-visible area. We had been driving a time bomb, thinking that the noise we were hearing was coming from another source.

The problem that I had with my tire is an example of how many problems human beings have behaved. Conflicts are a time bomb because we are not aware of the magnitude of the situation. Unless you discover the source, you cannot be safe from the repercussions of that problem.

Mental illness is a growing problem

Today, I want to talk to you about something that is making noise in our society. And many do not know where that sound is coming from or how to approach the problem. I have called this noise the invisible disease. Invisible, because it is not talked about, and it is not seen with the naked eye.

There is a stigma around this disease, which has led many people to hide their heads like ostrich in the sand. We will not know how to deal with it, either. I am talking about mental illnesses: this week we will be discussing crisis, mental health, and Christ on this blog. My goal with this week’s posts is to raise awareness of these diseases. I want to provide practical tools to address the invisible disease in your community.

Recently, there has been more awareness in our society about the importance of helping people suffering from mental illnesses. Many are advocating for this condition, especially authors Fuller Torrey and Judy Miller. In their book, “The Invisible Plague,” they say:

Imagine an epidemic that does not quickly kill a large percentage of those affected, but slowly kills 15% by suicide. Besides, imagine an epidemic so insidious and insinuating that two centuries after it began, it is hardly noticeable, mixed in the fabric of people’s lives, that a few intelligent people even deny that the disease exists. Imagine an epidemic that affects more than 4 million Americans, most of them in their prime of life, and that will continue to affect more than one in every 100 people born, but is not recognized as a major public health problem and it is largely ignored by officials who oversee the nation’s health. This is the epidemic of mental illnesses” (Pages 2-3).

This was written in 2001. If they saw mental illnesses as a growing social epidemic in this country at that time, then this crisis is currently at astronomical proportions. You have no idea what statistics we have today. The problem is that if this plague is increasing in our society, it will also increase in our religious circles.

The church is the first place where people with problems go seeking refuge. But, when they arrive, many times the leaders do not know how to deal with these problems due to the stigmas and the lack of information. Let us look at some statistics:

These statistics reflect a stigma that exists in our church. We can talk without any trouble about cardiovascular and respiratory diseases, cancer, and, hepatitis. But when diseases of the brain come up, we remain silent because of the taboo that exists around this topic.

I recently spoke with a friend I made at a conference. And he told me that at one point in his life, he experienced a very acute trauma. He sought professional help and was diagnosed with Post-traumatic Stress Disorder. With tears in his eyes, he told me he could not continue with his treatment. Because the administrators of my organization and his co-workers were going to find out about his diagnosis. He did not want his image to be affected and decided to suffer in silence.

A brother from church came to me and said: “I want to divorce my wife because she has a mental illness and. Due to the life that I have lived with her, I believe that I have the right to divorce her and marry someone else.”

“If your wife had cancer instead of a brain disease, would you have divorced her?” I asked him.

And he said “no,” that mental illnesses are different, and that there is no one who can stand a person with this type of mental condition.

As Christians, we are called to accept marginalized or stigmatized people. But many people find this a difficult task to do, especially when it involves people who are mentally ill.

Many people with emotional problems are suffering discrimination in our churches because, as pastors and leaders, we are not prepared to deal with the silent disease. That reaction is often the product of fear and lack of knowledge about it. God calls us to love our neighbor the same way we love ourselves (Mt. 22:36-40). That neighbor may be a church brother or sister. Maybe, he sits next to us and secretly suffers from a silent illness.

I ask you, have you ever felt marginalized or discriminated against due to a mental disorder that you have experienced? I invite you to share your experience with me. Write it in the comments section and help me eliminate the stigma that exists around mental illnesses.