10 Myths and Stigmas About Mental Health 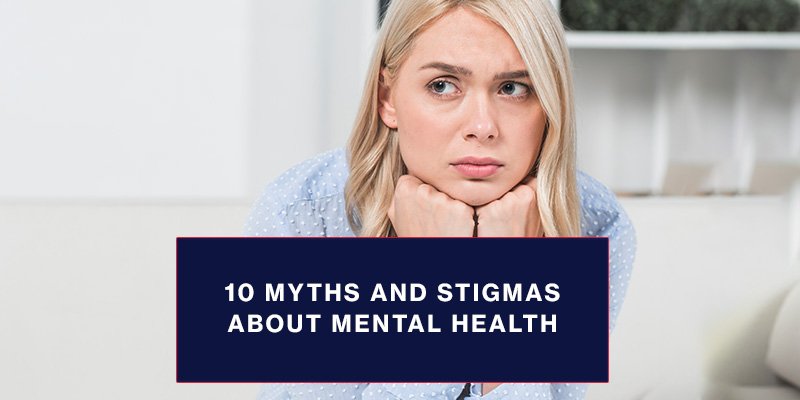 In addition to genetics, the day-to-day stress that our society currently imposes has become a trigger for imbalances on a psychological level. It has allowed the perfect substrate to develop for mental illnesses such as depression, anxiety, chronic stress, agoraphobia, and others to manifest.

Our society and mental health

The issue of mental health and mental illnesses is so misunderstood on a social levmembersel that a person who suffers from them is stigmatized. But to understand this phenomenon, let’s first look at what social stigma means in the psychological sphere.

Regarding mental illnesses, stigma is the label applied to the individual who suffers from any of them, which generates negative reactions from the human being, as they can lose self-confidence, faith in their recovery, and the ability to lead a normal life. This is caused by being constantly identified as “schizophrenic,” “autistic,” or “depressive,” among other labels according to their illness, leading to constant insecurity in the human being’s personality, and creating a feeling of disability.

Due to the stigmas that surround the person whose mental health has been affected, that person suffers from social rejection involving their work, church, and family life.

We know stories about people whose family members still do not know what their diagnosis implies, and who do not even show interest in knowing it or in how they can help their family members feel better or face the illness.

As we said earlier, there is the misconception that a person who has a mental illness should be referred to a mental asylum or a psychiatric clinic, when, in fact, there are treatments that balance brain chemicals that affect mental health. There are even supportive therapies, group therapies, and other tools to achieve this end.

More and more people are being diagnosed with a mental illness, and modern life involves high levels of stress and complexity that did not exist in the past. One in five people will manifest a mental illness at some point in their life.

Not all mental illnesses have the same treatment. It all depends on the causes, symptoms, and general condition of the person. But if the person tries harder, the symptoms will not disappear. Mental illnesses are real illnesses, as we said in earlier posts, the brain is an organ, and as such, it also becomes ill.

Treatment depends on the type of illness that affects the individual’s mental health. Some will need medication, others, group therapy, while therapies of another kind will help others. Generalizations in these cases do not apply.

There is a lot we can do for people with mental illnesses. Our support and understanding are of great value to the treatment and improvement of people whose mental health has been affected. Not judging, listening intently, not treating the person differently, and asking questions before giving any opinions can make a difference in the patient’s life.

Mental illnesses, when treated correctly, do not constitute an impediment to carrying out work activities. Many people with depression, anxiety, and even agoraphobia can have normal lives when they are treated successfully. There are cases in which the illness is very serious, and the person must stop working. But they are extreme cases of mental health impairment.

When a child has a mental illness, he/she can be treated with the techniques the case requires. Besides, that child can have his/her mental health restored. The earlier in the child’s life the disease is treated, the more the child can enjoy a full and happy life.

There are genetic factors that affect a person’s mental health. The way parents raise a child cannot be blamed entirely for the symptoms of mental illnesses. In this case, parenting plays an important role in exacerbating symptoms. Or on the contrary, being a base of support and understanding for the improvement of the child.

There is no such thing as “mental strength” in the context of mental illnesses. A person does not develop a mental illness because he/she is “weak”. Mental “strength” is not the same as mental “health”. Many people affected by mental health are people who show strengths and great aptitudes in other areas of mental performance.

We believe that mental illnesses are related to shootings or terrorist acts. These acts that we see on the news occur more and more frequently. But there are mental illnesses such as depression, anxiety, and autism, among others, in which there are no symptoms of aggressiveness or violence at all. Statistics show that only 7.5 percent of crimes are associated with people with mental illnesses.

10. Therapy is for adults only

Contrary to common belief, therapy is also useful for children with mental health problems. Therapies for children have an age-appropriate approach. They provide children with tools to cope with and manage their diagnoses. As well as, they provide emotional tools for parents and family members, giving them a safe and supportive environment for their development as individuals.

As Christians, we must be a source of support and understanding for people suffering from mental illnesses. Stigmas should not be part of our vocabulary or our actions. Specialty, when we address or interact with people who have mental illnesses.

What is Christian Divorce Recovery Counseling?
November 24, 2022
Does couples counselling work? The pros and cons that will surprise you
November 22, 2022