5 Things You Should Do To Regulate Your Emotions 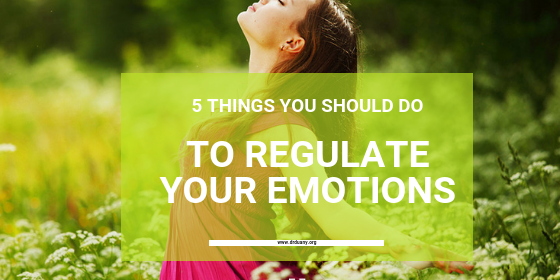 5 Things You Should Do To Regulate Your Emotions.

Many of us may remember the fight between Mike Tyson and Evander Holyfield in 1993. This fight made history because Mike Tyson bit off a piece of Holyfield’s ear. This emotional reactivity cost Mike Tyson $3 million of his $30 million purse, and his boxing license. What happened to Tyson that forced him to bite Holyfield’s ear? The experts argue that Mike Tyson had an amygdala hijacking. This term was coined in 1996 by Daniel Coleman in his book “Emotional Intelligence: Why it can matter more than IQ”
​​
The amygdala is the brain’s alarm center. It is the organ that controls and regulates our emotions. The amygdala keeps a record of all the emotive experiences you had in the past, and every time that it perceives that you are in danger, it sends an alarm signal of fight or flight. You know that you have been hijacked by your amygdala when these three things happen to you: emotional reaction, sudden onset, and when in hindsight, you realize it was inappropriate.
At some point or another, we have all experienced an amygdala hijacking. The opposite of an amygdala hijacking is what we have been learning in my latest posts: emotional intelligence.

Emotions are responsible for organizing the attachment behavioral system that orients and motivates responses, and communicates our needs and longings to others. The Christian view of emotions is that they are often a faithful reflection of what people believe and value. Emotions are part of the created image of God.

Emotions represent the reality of people’s faith, and God has promised in the Bible that those who believe in Him will receive a new heart (mind), as stated in Jeremiah 31:3. The goal of a faithful Christian is to conform his/her emotions to the truth, and to have the mind of Christ.

How do we learn to regulate our emotions? In this post, I will teach you five things you should do in order to regulate your emotions effectively and develop emotional intelligence.

Teach an amygdala to dance

First, as we have learned in our latest post, we need to practice self-awareness, especially in five key different areas. The following is a five-step program to regulate your emotions and develop Emotional Intelligence. This is an adaptation of Mark Goulston’s formula to teach an amygdala to dance.

Today, I challenge you to ask the Holy Spirit to help you regulate your emotions so you can reflect the mind of Christ. It is not easy to have self-control, especially when someone has done something that upsets you. However, with Christ you can do anything because He gives you the power to regulate your emotions (Phil. 4:13).