Let´s know the power of solitude 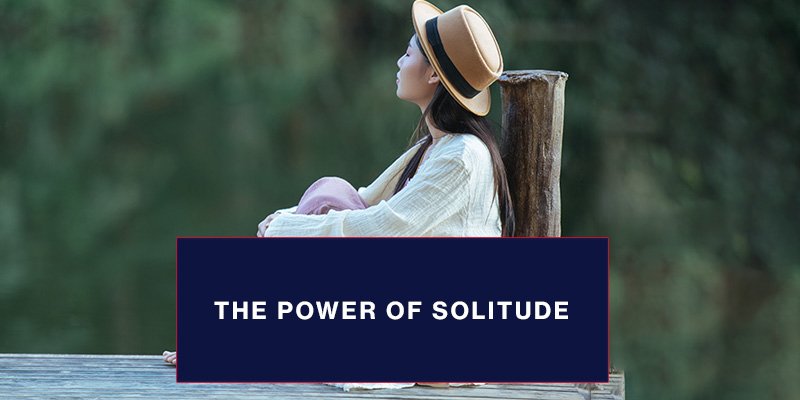 One of the biggest complaints I hear from my patients, and also people in general, is being overscheduled, overcommitted, and overextended, especially during this pandemic, where we are working from home. Let’s know the power of solitude, especially in these cases.

It has not been easy to set limits at home and the typical response we are hearing is “I am too busy,” “crazy,” “I am working more from home than from the office,” often said with a mixed tone of desperation and pride.

To use the power of solitude is a lost art

Even when we have time off, we are insanely busy exercising, texting, working, or watching TV. And when there are a few minutes in between all these activities, what do we do? We are constantly checking our smartphones for voice mail, missed calls, email, and our social media. I have to confess that this has been my experience many times.

Sherry Turkle, professor of Social Studies of Science and Technology at M.I.T., has interviewed hundreds of people of all ages about their daily fixations on social media and new technologies like smartphones and tablets. In a recent interview with Scientific American, Turkle stated that she is worried that there is at least one hidden cost to our addiction to technology, the loss of solitude. Turkle says:

“I do some of my fieldwork at stop signs, at checkout lines at supermarkets. Give people even a second, and they are doing something with their phone. Every bit of research says people’s ability to be alone is disappearing.”

Study shows the power of solitude

Do you remember the last time you were alone for more than 15 minutes without any distraction or noise? Are people afraid of being alone? In 2014, Science Magazine published a study performed at the University of Virginia in which several participants — a quarter of them women and two-thirds of them men — were placed in a room for fifteen minutes by themselves, and they were told to just sit there with their thoughts and an electric shocker.

These participants had previously stated that they would pay money to avoid being shocked with electricity. Even though they did not want to get an electrical shock, it was found that most of the participants placed in this room shocked themselves with the electric shocker. They did that just by spending 15 minutes in solitude. They could not handle being alone.

Furthermore, they needed to do something to feel alive. And the only thing they had in their hand was an electrical shocker. So they preferred to shock themselves than to be alone with their thoughts. We are afraid of being alone.

Humans have long stigmatized solitude. It considers it an inconvenience, something to avoid, a punishment, a realm of loners. Today, I want to rediscover the lost art of solitude, and challenge you to begin practicing this discipline in your life because it is the secret to reconnecting with God, yourself, and others.

The power of solitude

We cannot confuse loneliness with solitude because these are two completely different experiences. So, the first thing I want to do is to clarify the difference between loneliness and solitude.

Traditionally, throughout history, the practice of solitude has been associated with a spiritual discipline. However, in the mid-seventeenth century, there was a perceptible change. It reflects in the literature and poems of the day that indicates that solitude had become more inward-focused.

Individuals sought solitude to focus on the self rather than God. When the field of psychology began to take a more prominent place in our society, solitude used as a practice not to bring people closer to God, but themselves.

However, in the Bible, we can learn how great men of God found shelter, renewal, and a deeper connection to God after learning how to spend time in solitude, time alone with the Creator.

In solitude, we can find the place, time, and inspiration that allows us to get away from the day-to-day rush and allows us to reconnect with God.

Would you like to learn more about how solitude can help you reconnect with God? Do you know any Bible stories about people who had a close encounter with God in solitude? Share your answers with us in the comments section. God bless you.