Foundations of a healthy marriage 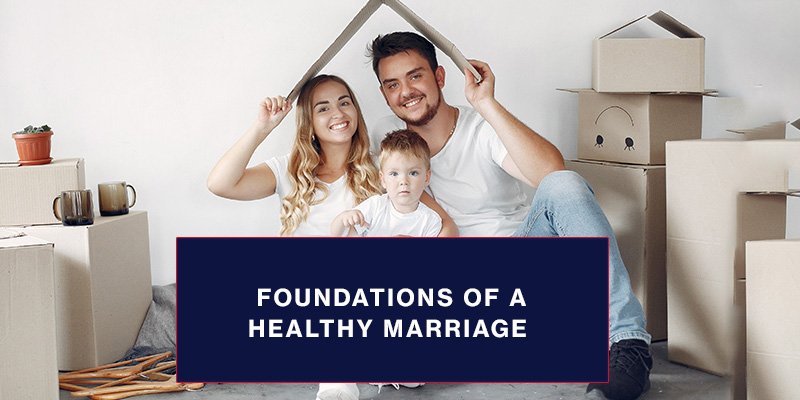 The house where we are currently living was recently built. We followed its construction in every step. The foundations, the walls, the ceiling, everything followed an order, a design according to the architect. Not following the architect’s plan is to fail in construction.

My wife loves decorating the house. She has plants all over the house, as well as mirrors, paintings, figurines, and furniture. But, none of that is of any use if the house does not have a solid foundation, walls that resist storms, a roof that protects the people inside and protects us from inclement weather. Every aspect of the construction has an order and a purpose.

The same happens in marriage, which must have a good foundation, a good basis. It must have walls that protect, a ceiling, everything must follow an order. There are many people who get married and believe that making love all day is enough, and everything else in the marriage will work out just fine.

I have met men who have told me, “If my wife cooks well, that is enough for me.” Others say, “If she has a nice body, that is all I need”. This is like saying, “if my house has a nice decoration, that is enough”, “if it has the right furniture, that is enough.” It is pointless to have decorations, furniture, flowers or expensive items, if the house does not have a good foundation and has not been built correctly, because when the storms arrive, everything will collapse.

What is building on sand when it comes to marriage?

It is saying “I love you” on the first wedding night and not repeating it ever again. In my office I see many patients who come to me with complaints about husbands who do not tell them they love them and that they do not receive hugs from them.

Building a marriage on sand can also happen when, for example, a woman is willing to cook very good meals, but on the other hand she does not want to be intimate with her husband. Intimacy is important in marriage.

Building a marriage on sand is when you drive a nice car for the year, but there is no money to pay for it financially. Financial problems are one cause of marital conflicts.

Marriage is also built on sand when people want to be married, but they do not share quality time together.

A marriage is built on sand when there are no limits and there is room for other people, such as mothers-in-law or others, to be allowed to interfere in the marital relationship.

It is also built on sand when there is no time for God in the marriage. When people begin to have problems, during a hurricane, without God everything will collapse.

In the next posts, we will be talking about how to build a marriage on the firm rock that is Jesus Christ. But, in order to be able to build effectively on the rock, we must be clear about the way we must structure our marriage in such a way that it lasts and withstands all the vicissitudes that come.

We will start by understanding what the foundation on which marriage must be built is, in order to be able to have a happy, healthy, blessed marriage.

The foundation of a healthy marriage

The way in which people proceed when building a house, laying the foundations (good foundations), is the same way marriage is built. The foundation we lay to build our marriage will determine how strong it will be when all the vicissitudes of life come. If it is a strong foundation, built on Jesus, our Rock, the marriage will be steady on the Rock no matter what kind of problems come, or what storms hit it.

On the contrary, if the foundations that are built are anchored to banalities, appearances, deceptions, lack of intimacy, storms will come and hit the weak foundations that have been built and the marriage, in the face of any vicissitude, will collapse.

So, what foundation must every marriage have?

The answer is God.

Yes, the foundation of every marriage is God! Unless the Lord builds the house, the builders labor in vain (Psalm 127: 1). God instituted marriage and He wants to be the center of it.

God said, “let us make man in our image, after our likeness”. What does this mean? That man was created in the image of God. Marriage is God’s invention and must show the relational image of God. A triune God manifested in three persons.

Since we are God’s creation, in his image and likeness, when building the marriage relationship we must put into practice the conception of love that comes from God, in which intimacy (not only sexual intimacy in marriage), understanding, respect, acceptance, harmony and working together, constitute the pillars of those foundations on which the rest of the structure of the house will lie.

And since we have understood this great truth, we might ask ourselves, but how do I build my marriage on that foundation that God provides? The answer is found in the truths and advice that God has left in his Word.

Spend time alone with God: the couple should have time to be alone with God. The couple who takes time to pray together stays together. This must be a priority in every Christian home. Pray as a married couple and family.

Follow God’s will. A couple who has God as the foundation of the relationship makes the decision to let God’s will define their lives. If God instituted marriage, don’t you think He knows which decisions are best to make in a marriage? How many relationships today are emotionally and spiritually bankrupt because they left God’s will aside in order to satisfy their personal desires and whims? This was exactly what happened with Adam and Eve. They put God’s will aside in order to satisfy what seemed right before their eyes. That is why it is imperative for every couple to take the time to seek God’s will through the Holy Scriptures.

Forgiveness: A couple that has God as the foundation in their relationship forgives in the same way that God forgives us. One of the main teachings we can find in the Bible is that we must forgive, just as God forgives us. Forgiveness in marriage is one of the strongest foundations a relationship can have. To err is human but forgiving comes from God. He taught us that we must forgive. With forgiveness, wounds will heal, problems and conflicts will be resolved, and an opportunity will be given to correct mistakes. And, this way, the marriage will remain anchored to the rock, no matter how strong the storm hits.

Everything said above will be supported by love as a strong basis, which will be the main material with which not only the foundations of marriage should be built, but the entire structure. Unconditional love for God as your creator and unconditional love for your partner.

Have you stopped to think about what and how are the foundations of your marriage? Do those foundations reflect the relational image of God? Are those foundations strong, or are they weak foundations? Have you been beaten and weakened by life’s experiences? Is there any other foundation you think that could be of great importance? Share your answers with us in the comment section. This way together we will enrich our experience. God bless you.

There is no intimacy without vulnerability
March 12, 2021

How to strengthen your marriage?
February 24, 2021