How do emotional traumas develop in families? 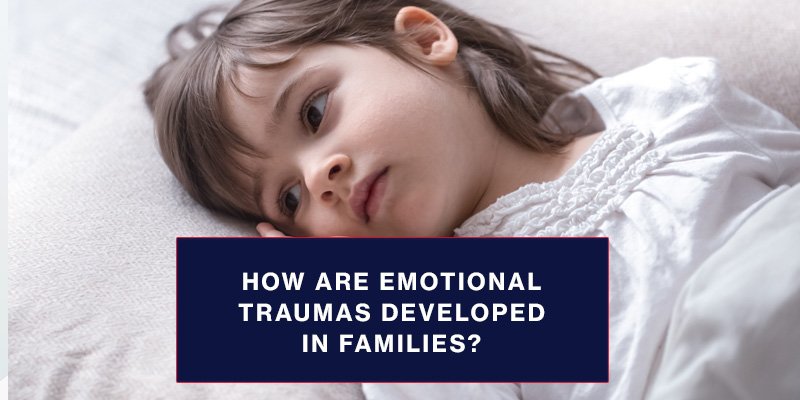 Families are living on a battlefield. The situations in our society have made it this way. How do emotional traumas develop in families?

Many professionals dedicate their time to studying this phenomenon. Among these professionals is Doctor Joyce Brothers, who presents some terrifying statistics (1984):

What is a dysfunctional family?

Thus, a dysfunctional family is one in which conflicts, misbehavior, and, often, abuse by family members, happen regularly, which leads to other family members accommodating such actions. Healthy families also go through crises, but after the crisis, they go back to functioning normally.

To understand the process through which a family’s emotional dynamics transmit from one generation to the next one, we need to understand the systemic concept of the “intergenerational transmission process.”

It is the transmission of values, facts, secrets, stories, emotional dynamics, and dysfunctional behaviors from one generation to the next. When these aspects transmit in a non-elaborated or non-processed way, they go from one generation to another in the same way, affecting the family’s mental health and healthy balance.

Today, we will talk about the influence that the intergenerational transmission process has on the foundation of functional or dysfunctional families, o their characteristics. We also see how it causes emotional traumas and how the dysfunctional cycle in the family can be broken.

How do emotional traumas develop in a family?

Some families have dysfunctional behavioral patterns that go from one generation to the next. These patterns can be alcoholism, consuming drugs, emotional, physical, verbal, or sexual abuse, mental illnesses, and an autocratic parenting style.

Let me tell you the story about a man named Pedro. His life story is a sad one. I met him when I was living in Philadelphia. His wife, a church member, called me one day. She desperately said to me: “Please, Pastor, do something for my husband. He is addicted to heroin.” When he had no money to buy drugs, he would sell whatever he found in their house he could buy drugs.

One day, I saw him in an abandoned house buying drugs. He told me his story. His father was an alcoholic, so he introduced Pedro to that world when he was still very young. And, from that moment on, that teenager’s life of no control began. He went from drinking to consuming marijuana. Then, from marijuana to cocaine, and then to heroin. This is the story of a young man who grew up in a dysfunctional home and got lost inside the addiction maze.

The toxic effects of dysfunctional families cannot measure. Children are the most affected in this type of family. All of these maladaptive behaviors take away the possibility of having a happy childhood. They also avoid the parent’s need to become functional adults in the future. Behavioral patterns become a “family script.”

There are several clinical studies that it proved that small emotional wounds produce daily and the lack of attachment with our parents can produce traumas that last a long time. These emotional traumas were produced every time:

And many wounds that were inflicted when they were told:

All of these experiences were emotional traumas that inflicted wounds on their self-esteem. Even if it was the scenario in your home and family. Or even if today it is the scenario you have in the family you have built. Well, I have good news for you.

Even so, the deepest traits of our personality affected by adverse situations can transform. Yes, with the desire to change and improve as human beings and to be the best version of ourselves in Jesus Christ.

Do you want to know more about this topic? Then, I want to invite you to read our next posts, in which we will continue studying the main effects and characteristics of dysfunctional families so that you can overcome these difficulties. God bless you.